" You can't fake an Ironman. Reasons why yesterday was my slowest ever.

And thats that. My last Ironman branded full distance race. Not how I'd liked but what I should have expected. 16:38:32 - Thanks for all the cheers at the course and here on facebook. Thanks to sherpa Oliver for the company on the last 2-mile walk, and to Lynnivere for the pom poms. What else can you ask for greeting me at the finish line by Tenille , Amy Cottrill Marsh, and Anita! " - end of facebook post.
In the 3-other full/Iron distance races I've done I wore speedos under my wetsuit and then changed into bike shorts for the bike, in fact, I should have read my Ironman Arizona race report, it had everything I needed and most things I forgot for this race. Aiming to make up for my lack of training, I figured as always I could make up for time in transitions. Rookie mistake and ended up in severe discomfort. 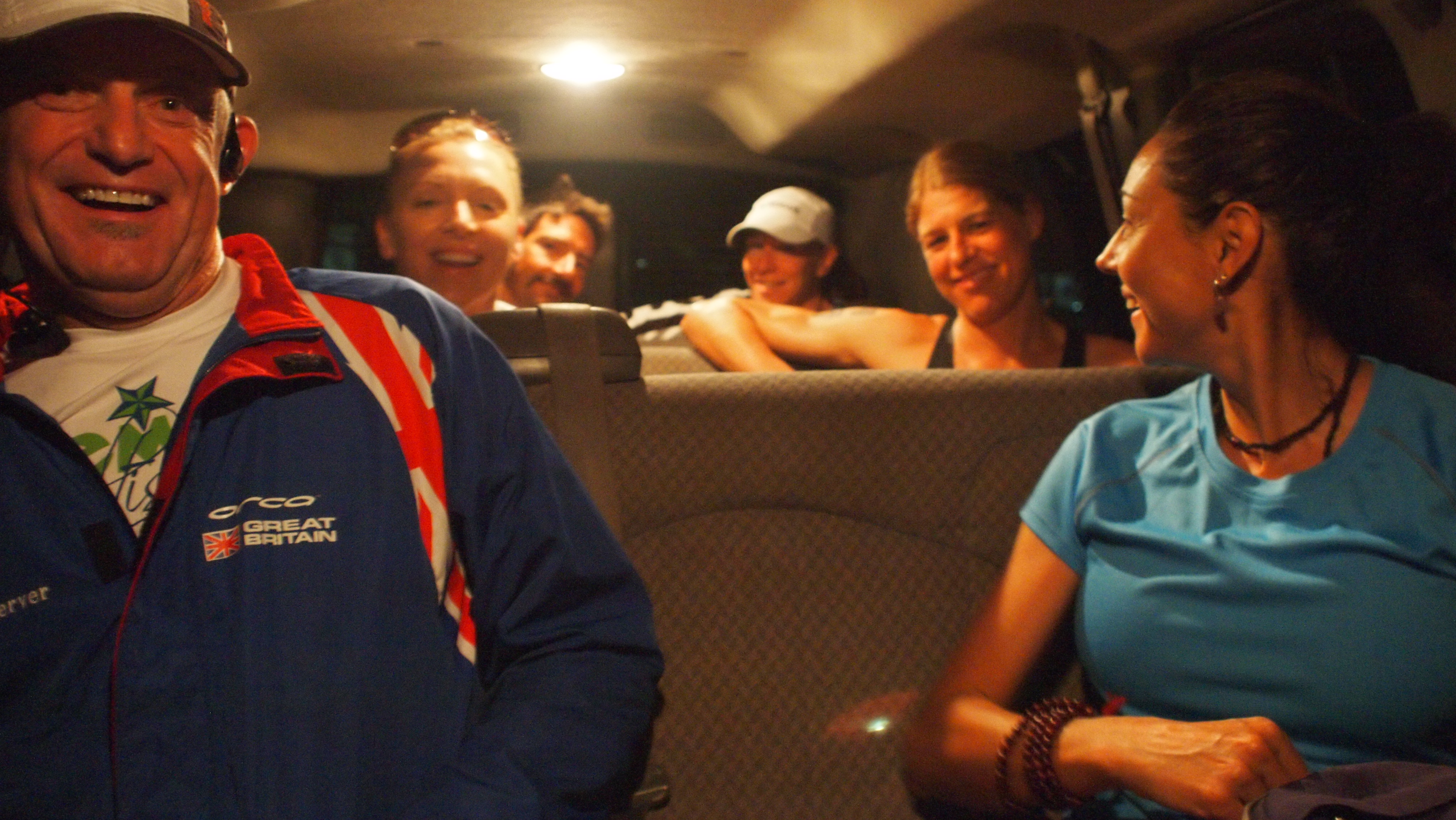 Pre-Race: I'd rented a house in downtown Cozumel, and had the pleasure of having pro triathletes Brandon and Amy Marsh, Tennille Hoogland, along wit

lynnivere nd Anita and Oli. Here we are heading to the race start in a taxi van. I can highly recommend Casa Cascada, Pawal and Alex were super helpful and the house was in a great central location.

SWIM:The swim was always non-wetsuit, so I decided to swim in full tri kit. Mistake number-1, in the salty water, my tri top rubbed my neck raw, and under-arms. The swim seemed good to the first turn, but after that turned into a long ass swim from bouy to bouy. The bouy's had moved, some significantly, you could clearly see the drag lines from the sandbags, some as much as 100ft. Who knows if that made the swim longer or shorter, but there was a real swell. 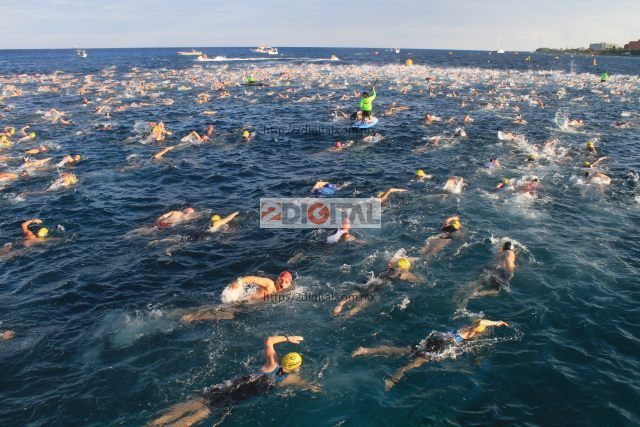 By the time I did the last turn into the swim back to shore, which seemed like a mile, I was close to being sick, it was pretty awful. When I got to the steps to get out, there were no helpers and I had a hard time getting my first leg up, I ran slowly in past race commentator and longtime friend/coach Steve Trew and into T1. Swim 1:50:08 for 2.4 miles, 31 Age group(Arizona 1:14:48)
T1:
I thought I was quick in T1, apparently not, its not clear what I was doing for 7-minutes, 15-seconds but our racks were the furthest from the mount line and just outside the Mens changing tent. On reflection I think I was sitting with my head between my legs trying not to throw up. 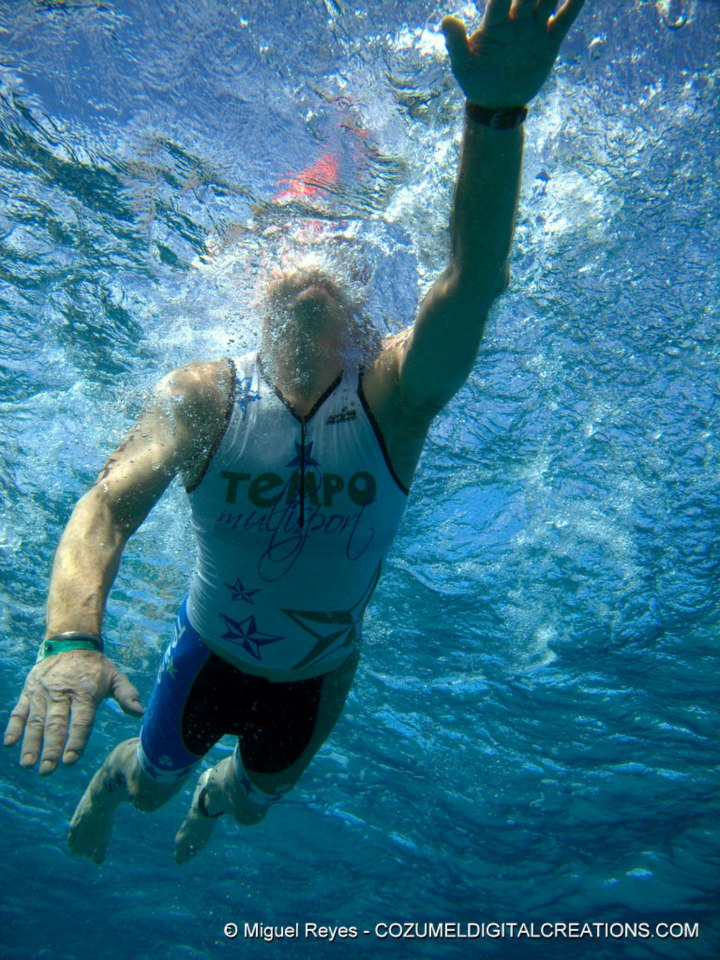 BIKE: I had a really long run with my bike from just outside the changing tent; I did a running mount mostly ok, and once outside on the main road, tried to put my feet in and messed up. I dismounted, put my shoes on and restarted, once out on the road felt good, and the ride started. On the far side of the island the wind was strong but bearable, around onto the long wide stretch back into town I cranked up the speed and was soon passing people at 25MPH, then squeak, squeak, bang.

I stopped, and yep, my tire had a hole in it almost as big as a dime. My first thought was my race was over, and then I remembered as slowing I'd passed a gel wrapper. I propped my bike up against the bushes and hobbled back up the street collected the wrapper, went back and used it as a tire boot, folding it three times. I fumbled a couple of times getting the C02 cartridge into the gun, and gestured to the two guys who had stopped in a jeep opposite me in the middle of the road for a pump, but they just sat there looking. I got the tire inflated and was off.
And here is where I made my next mistake; rather than patiently pacing myself back into the race, I hammered as quick as I could back into town, sometimes reaching 27-29MPH. Back in town I found Lynn, Oli and Christy, told them what had happened and asked Oli to find me a tube, tire and CO2, and I'd see him on the next loop. 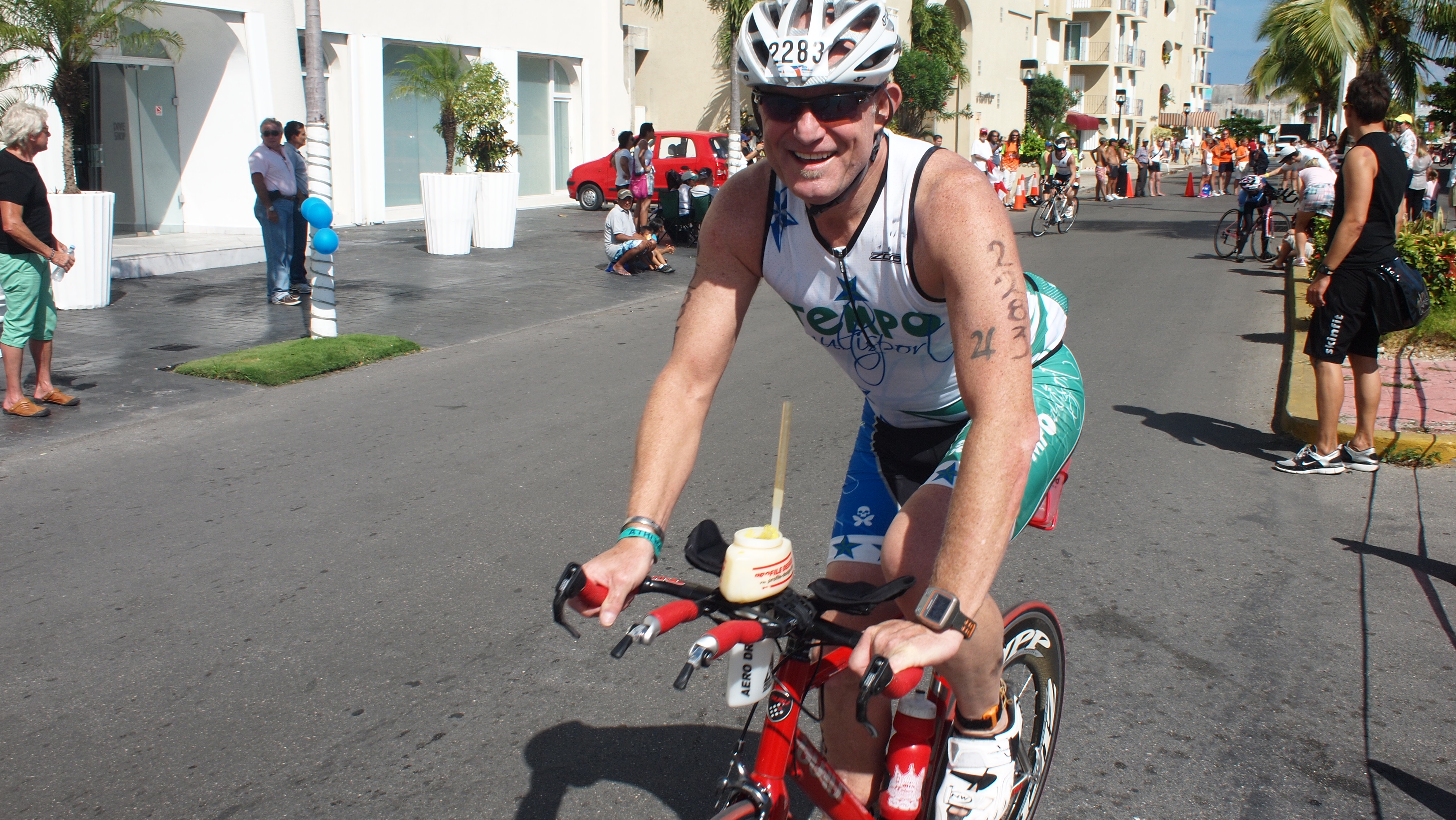 Again I went thrashing off, only this time to be passed by Tenille, she was flying and seemed really happy. I shouted after her, she was in 2nd, and gave me the thumbs up and was gone Around on the back of the island, Jason caught me up, we had a brief discussion, and Jason offered his spare tube from his special needs bag. On the way in I stopped and collected a CO2 cartridge from the road, at special needs, I grabbed the tune and tried to disappear at high speed again, only I was already tired. 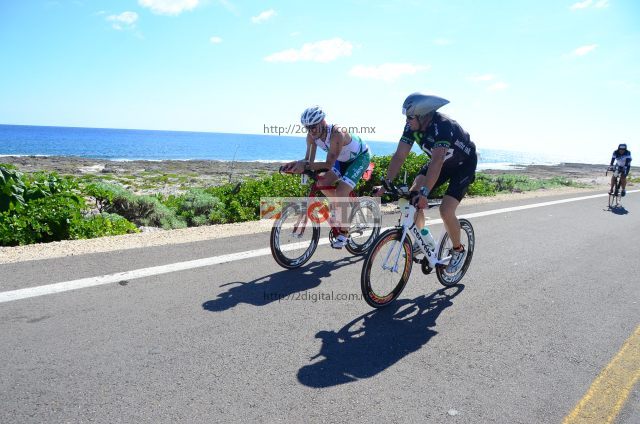 I stopped when back in town for a quick word with Oli and Lynn. Oli had miraculously found a tube and CO2, but since I had one from Jason, I didn't want to risk a DQ for outside assistance, and left them to it
On the 3rd lap of the bike there was nothing except water and Gatorade anywhere to be found. This was bad news since I'd been sticking to my nutrition plan by time, and was now out. Just up the windy side of the island my back tire went again, I stopped, fixed it, booted it with a small ziploc bag I had my salt tabs in and was off.

By then it was clear I was going to be over 7-hours for the bike, and much to my surprise, while riding around the windy side of the island, there were four of us spread out across the road, we were called for drafting by an over zealous official, I pushed ahead but that wa clearly ridiculous call. Especially since as I learned later, none of the male pro's had drafting penalties and many either were or were pacing each other.

I managed to pick up the pace heading back into town, and cross the dismount line with a somewhat running dismount, disappointed I already knew I was in trouble. Bike time 7hr 18mins; average speed 15.34 MPH. Very Disappointing.

T2 Again, I'm not sure what I was doing in T2, I seem to remember trying to cram down some gels, putting on compression socks, my shoes, most of all I remember sitting there trying to decide if I should quit, I didn't and headed out. T2 time 12:55, 37th. 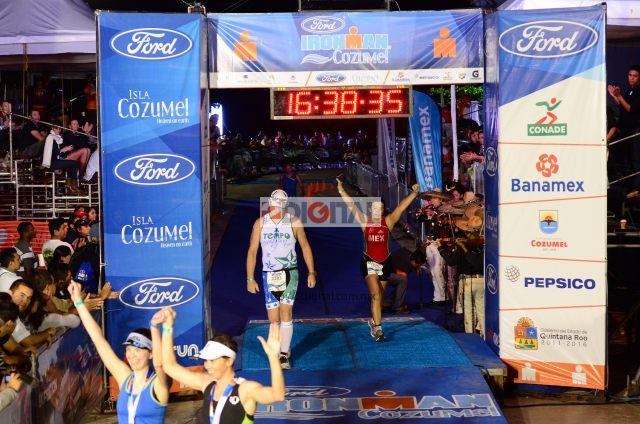 RUN: The run was 3x loops, just over 8-miles each. The first loop I was feeling OK, and managed to run most of it, stopping only at one aid station to rinse down with water. There were loads of people out on the course, it was great to see many of the Austin crew.

Sadly though just before the half way turnaround on the 2nd loop, the wheels came right off the bus. Not even at the half marathon turnaround, I was done. Knees hurting, no energy and really tired. The was no option but to walk/jog and then really walk the last 14-miles. Oli came out and found me as I headed towards the last mile, concerned as I'd been so long. I did my best to run in, crossed the finish line. This picture totally sums it up for me. Totally disappointed. The two women in front, and the woman behind, elated. Me, not so much. Run time 7:10:13, 37th.

Total time, as you can see from the clock in the picture, a hugely disappointing 16:38:32. My slowest Ironman, and my last Ironman branded full distance race. You can check the full results, by age group etc using this link.

I wasn't last in my age group, I was 2nd from last. 7 people from my age group did not finish. Overall the drop out rate was pretty high, with a lot of people not making it out onto the bike. I don't think I did anything right really. It's a totally humbling experience. Yes I finished, but when I did Longest Day triathlon back in 2006, my first full ironman distance race, I hadn't trained for that either, but I had trained.

Next up is Challenge Roth, my last full/Ironman distance race. There will be no faking it involved.