I've been racing the Couples Triathlon out at Decker Lake most years, since 2007, when I raced with my livejournal friend

anetmarie. This year though, instead of racing in the "Friends" category, for the first time I got to race "More than Friends" with Kate. 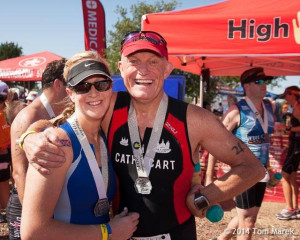 So it was my fastest ever. The start was, for the first time I can remember, a time trial start. You can see Kate and I starting in the LJ banner above, Kate laughing as I went racing off. I know Kate was concerned about the 800m open water swim, but equally knew she'd do fine on the bike, and neither of us are fans of the 5k course at Walter E Long Park, which includes the big downhill, followed by coming back up, all off road. 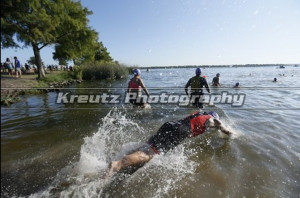 For me, the time trial start allowed me to settle into my swim quickly after a pretty decent start, captured by Kreutz photography here. Including dolphin dives. I was out of the water in 14:57, not a great time, but reflective of the amount of swim training I've done.

Up in the hill and out through T1 in 1:47; bike mount and the bike went great, I got passed by three faster people heading along the back of the lake, when I rounded corner, they were all on the floor, or off their bikes, I guess someone went into the sharp corner too fast, and took the others down? 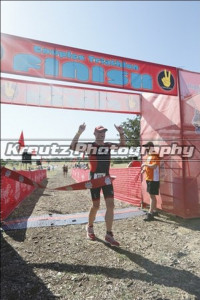 Back into the park dismount went fine, Kates' bike had gone which meant she'd survived the swim and before I knew it I was on the run. I'd been working a more tempo pace rather than flat out. The run down the hill was, as predicted cautious, and coming back up the hill slow. I finished strong and pretty much headed over to transition.

In transition, I was delighted to see Kate's bike was back, and so I ran back out on to the run course in reverse direction. I got to the top of the hill, and sat down. Almost as soon as I sat down, I spotted Kate coming back up the hill, I jogged over and ran back in with her.

My data from the race is on sporttracks.mobi here. 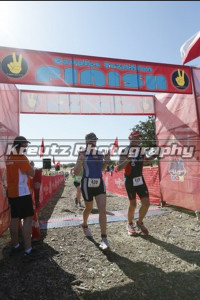 After the race Kate and I packed up and left. After all, it was only Kates' 2nd triathlon and we knew we were competing with more than friends teams made up with many friends, Keith Kennedy and Christy Doll, Amy Chow and Michael Ayer, who finished 1st and 2nd respectively, Erin Truslow and boyfriend Adam Reardon, and many other fast couples.

It was only yesterday more than 2-weeks later, I went to browse the official results and found that Kate and I, Team Mates, won the More than Friends 95+ category in a combined time of 3:04:58.8, and finished over an hour faster that the 2nd place Team - Be Creative C&M.