Triathlon Business International (TBI) President Jack Caress has posted the organizations first blog entry. It's about race fees. It's not really a blog in any traditional or technology sense, it's really just a web page and an email address for feedback. A single comment has been posted, there is no comment box, no trackback address, no login etc. It also has a very odd URL http://www.triathlonbusinessintl.com/blog-example.html - I've no idea if this will change, we'll see.

As an individual member of TBI, I received an email with advance notification of the blog proposal, with a monthly schedule which already had an active.com blog scheduled and a call for other submissions. It will be interesting to see how this develops but the initial format is disappointing. I'd rather post here than send an email with remarks that are never seen again, or that disappear when the next blog takes the same URL.

In his "blog" Entriy Fees: The 3rd rail of triathlon for the RD, Jack discusses entry fees and postulates that entry fees for races are great value, and race organizers often under price their races. It's a sweeping characterization, and one I can't agree with. Reading Jacks remarks gave me the impression that the race organizer is the top of the pyramid and that they should reflect the true value of everything the race delivers, as well as the community below them. It's the pinnacle of the sport.

I've never seen it that way, except perhaps as an end point. If you are either trying to race in, or qualify for one of the bg marquee races, Ironman, ITU Worlds, Challenge Roth, Wildflower, Escape from Alcatraz, etc. then maybe the race is a stopping point, but it's not the pinnacle. Other races will follow, more training, more expense.

Race entries in recent times, especially for the big brand and series races, seem to have shot up. I'll acknowledge as a former race organizer and race director, as well as an event volunteer captain at a major national and international races, that at least for Western Europe and the USA, there are now a lot more health and safety requirements than there used to be, and those cost real money. As a former club triathlete, triathlon club chairman, I know that even small races can bring in big money. 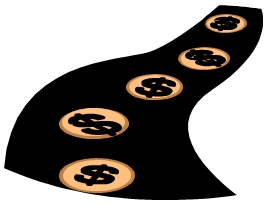 From a philosopihical and athlete perspective, I have an entirely different perspective from the one I think Jack was opining. Race entries are stepping stones. Often for new triathletes they are the first stepping stone. If the price is too high, they'll never start.

Single discipline sports, often the ones triathlon is derived from, Running, Swimming, and to some degree cycling, the race is a major component of the cost, but rarely the barrier to entry. Running, swimming and cycling often involve club membership, which can pricey. Triathlon doesn't require, and often doesn't involve clubs. Single discipline athletes have the same structural cost curve, you can certainly run in an old pair of runnig shoes, enter a local 5k, and spend very little on training and race clothing.

However, as soon as you get hooked, start looking at longer running/swimming races, big city marathons/events, specialized shoes and equipment the price starts to rise. The same is true for triathlon, the difference is we are looking at 3x the sports from the get go, much more training time, higher equipment costs, higher coaching costs and on. One of the best break downs of the cost of triathlon is here, where at 2008 prices a budget triathlete will spend as around $7,912.50, and compared to a "big spender" dropping a staggering $34,830.(1.)

No one wants to see race organizers lose money or go broke. Equally competitors don't want a dangerous race. We've seen both of these situations in the past year with the emergance of low quality color runs, and less than safe mud runs and similar. However, race organisers have to accept they are part of an equation, not the pinnacle.

There is a steady, and growing recoginition that the WTC/Ironman has, as they say here, "jumped the shark". The race price has gone up, the local personality of the races has gone; they are staged, move on and re-use everything they can, with some exceptions. Increasingly, I'm seeing people who won't race their races because of the entry price rises, and the declining vaue.

I raced TriRock Austin on Labor day, and at least based on the Cadence Sports results page for the sprint and olympic, finisher numbers are back to what they were in 2008, and some 400 down on 2010 high of 1821 finishers for the Avia Austin Triathlon, all distances. I have my own thoughts on the race value, but despite the free availability before the race of $20 discount code, I heard from a number of people complain about the steep $170 entry fee.

In his blog Jack says "most athletes enter races (including ours) very late, often right before the race itself.  The price was largely irrelevant, no event was charging so much that no one would enter at current pricing ceilings."

That is a relatively new phenomenon, and not true for many races. In the UK, we were used to entering races,even sprints, as soon as registration was available. They were an affordable price, you were gambling very little, races would sell out. You were on the first step, not the top of the pyramd. Certainly races used to sell out more quickly here in Austin TX, so either they are priced to high now; don't deliver the value; or there are too many races or not enough athletes.

When you entered races early, you'd commit to the training, buy the new shoes, bikes, get the coaching, join clubs, enter B-races, do more training and if you got injured somewhere along the journey, you got injured, what you lost in the entry fee wasn't huge. Jack says "Entry fees are almost always too low", I say not. Entry fees should be low enough not to discourage participation, but in recognition of the race organizer needing to cover their costs; make a profit; produce a safe and enjoyable race, high enough to profit.  It's too bad that shoe manufactures make 2000% markup; bike shops make 100%, and race organizers can't make the same amount of profit.

Race organizers, don't be like Ancient Egypt and end up a decaying pyramid that no longer supports you industry, be the stepping stone that enables an amazing journey.