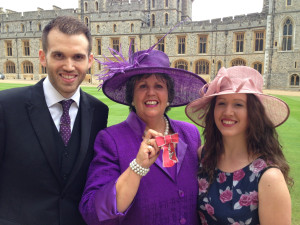 Yesterday was Jasmines' birthday, here is wishing you a belated happy birthday Jasmine. I'm long overdue congratulating Jasmine for being recognized in the highest way in the (British) New Years Honors list and awarded Member of the Most Excellent Order of the British Empire (MBE).

British Triathlon has a piece on her professional achievements, here. I was reminded I hadn't posted, when doing introductions on a telephone call with Rich Allen, the Executive Director of the newly announced Professional Triathlon Union. The best piece online about Jasmine is here, on the early220 blog. For anyone who wants to know the major names, events and triathlon history of the UK, this is a great read.

I met Jasmine in late 1999, she was definitely one of the major infuences that convinced me, and by inference, I'd guess thousands, to become triathletes. I'd done my first two sprint triathlons, my home town event, the St Albans Triathlon, that I'd later go on to be the race director for; and an another race, called the Flashman triathlon in Leicester. Then it was winter, keen to keep up the training, I entered a race called the Mudman, a dualthlon, put on by Human Race.

I had no real idea what to expect, it was all offroad, on a tank testing ground. The race date was December 18th, 1999, and come race day it was freezing cold, and we were expect to ride through water traps, and more. I must have asked more dumb questions before the start of the race than I have for the rest of my triathlon career combined. Jasmine answered all of them quetly, and with her huge, trademark beaming smile.

The race was, well, an experience. I came 86th out of 105. I was wet, frozen and exhausted. Still after the race, Jasmine made a point of coming to find me and see how things had gone. She encouraged me to come back and race in the next race, March 2000 version of the race, and later the November 2000 race. I saw Jasmine at both, along with John Lunt. Over the years they would become my go to people when it came to triathlon. Both open to questions, Jasmine would take time to answer, John would just be brutally honest.

I'd go on to work with them, as a volunteer, race capatin and they'd always be available for advice and help. Aside from being the guy with the red flag for bike out and dismount line for the Windsor Triathlon, I went on to volunteer with Jasmine at ITU races, and be a part of the 2002 Commonwealth Games triathlon team. While I initially volunteered for the Olympics Games Triathlon, I wasn't able to participate in the training events, but came back the following year to be a captain for the (notorius) Hyde Park Corner section of the ITU WTS Event.

My biggest opportunity to give back for all the years of advice and kindness was in 2004/2005, when I was able to be an evangelist and advocate for Jasmine in her sucessful run for Chairman of British Triathlon in its' key transitional year.

Posts from This Journal “bta” Tag