A Big Surprise: You can't out run genetics

It's been somewhat depressing the degree to which I've felt "old" over the past year. Recovery seems to take forever, I just don't seem to have the power I've had before, even allowing for the drop-off in training.

On July 30th, Kate was racing in the womens only, Outdoor Diva's Triathlon, up at Union Reservoir in Longmont. When I woke-up, I didn't feel great and figured a good run while Kate was racing would shake off the cobwebs. I can't really remember when I started feeling really odd, but it was definitely before Kates race started. Of course I said nothing.

After Kate was out of the swim I took off on the race run course, I figured if I ran fast enough for about 2-miles, I'd be able to catch her about 2/3 of the way around the rectangular 13.4-mile bike course and hopefully getting the blood circulating would stop my palms and the inside of my elbows to tingling, also ease the tightness in my chest.

As I didn't feel great, I knew it wouldn't be a fast run, so I didn't bother with my heart rate strap, which was a shame. You can see a partial run here. I was somewhat light headed, and didn't remember to restart it after I stood around applauding and encouraging other competitors. I took at jog back to the aid station where I stopped and helped fill and hand out water cups. All the while I was feeling increasingly light headed and the tingling in palms, elbows and chest still there...

When Kate came by with 1-1/4 miles to the finish, I ran alongside congratulated her and said "I'm not going to be one of those guys who runs alongside yelling at his partner", and left to beat her to the finish and take her picture, which I did. At the finish we stood around talking for 15-minutes, at which point I said to Kate that I had to sit down as I felt I was going to faint.

Kate insisted I got see the race EMT’s at Rapid Response Paramedic Services. They hooked me up, and took an ECG. After not more than 30-seconds we were discussing calling an ambulance. The Mountain View Fire Services arrived what seemed pretty quickly and before I knew it I was heading in an Ambulance to Longmont Hospital. Turns out the one of the EMT's in the ambulance, Carlos, had been a volunteer with me at Ironman Boulder 2016. 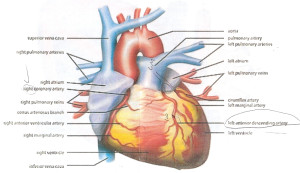 I was lucky, just a few minutes after being admitted to ER, I was whisked into cardiac surgery. Turned out there was a cardiac surgeon/consultant, Dr Paik, who had already been in on Sunday attending to another patient. It was all very surreal as the went through my groin to put a stent in my left anterior descending artery, while I was laying, wide-awake next to a 70-inch monitor watching the surgery. It was amazing to see the blood start gushing into that part of my heart once the stent was opened up.

The artery was blocked 100%. The picture on the left is a scanned version of the illustration the Director of Cardiology, Dr Abboud marked up on a follow-up visit. I'd speculate based on how I feel now, that it had been for sometime, or at least pretty close. Possibly even blocked the week before at the Tri Boulder race.


The good news is I'm fine now. Better in many respects. 1-month in, I had an excersice induced stresst test with 3x MRI before; After(front,back) of my heart and everything looks good. I'll be doing the WithoutLimits Oktoberfest Sprint Triathlon in 10-days. As Dr Paik said, no matter how healthy you are you cannot outrun genetics.