I've long been a carbo pro user, so I was especially disappointed to see that their MetaSalt Brand had been added to USADA's High Risk List.

I wrote this earlier for 303 Triathlon, I've no idea if/when they'll publish it and thought it worth sharing here.

Every now and again a triathlete is suspended for failing controlled substance test. More often than not, the announcement is made by the IRONMAN® Anti-Doping Program and sometimes from USAT. This week, it was announced that American professional athlete Lucas Pozzetta accepted a six-month suspension for an anti-doping rule violation after testing positive for a prohibited substance from a contaminated product. 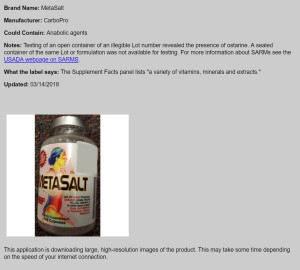 It’s actually less than easy to find out what the contaminated product is, and since I’ve managed and worked with a number of professional triathletes, and am vehemently against athlete doping, I always do my best to keep up to date, especially when it comes to contaminated products. For various legal reasons(I guess?) the products are almost never discussed in the press release announcing the findings. That’s what happened in this case. No named product.

I went and checked the USADA High Risk List and while there is no indication of a link between Pozzetta and  MetaSalt, it’s worth noting that MetaSalt has been updated on the High Risk List (see attached entry). In this case, we had a bottle on the shelf in the pantry. Unfortunately since there is no batch number, or other unique qualifying detail, I can only implore you to discard this if you have it, I did.

Racing Clean is not just the purview of pro’s and age group winners, it is an important stance for all of us to take. It’s not sufficient to just demand more testing, that would come at an enormous cost. It’s estimated it costs some $300,000 to catch one cheat. I don’t want that bill added to my race entry price. Train clean, race pure.