I don't have a race report on Wildflower Long course when I did it in 2003, I didn't start on

livejournal until January 2004. Just after deciding to enter for the 2018 race, as motivation for a formal comeback post-heart attack, I wrote up this article for 303 Triathlon. It was poorly formatted when posted, but you get the idea.

Wildflower 2003 for me had all been about an epic journey to an epic race. As it turned out, the race was subject to major run course changes due to rain leading up to, and during the race. I remember not being as prepared as I'd liked to have been; breaking a front wheel spoke and it buckling, and struggling on the run up a massive hill twice instead of once on the regular run course.

From memory, my result(7:22) was a reflection of the very tough run course, and the broken spoke and buckled wheel. I could beat it, even post-heartattack and 15-years later. How wrong I was.

In my 19-years or so of triathlon, I've had some pretty disappointing results. I've DNF'd a few times. One of the first being the MiamiMan in 2006 (race report here). Most of my poor race results were really no more than being too blasé and not treating the course with enough deference. That was in the end my story of Wildflower 2018 Long Course. 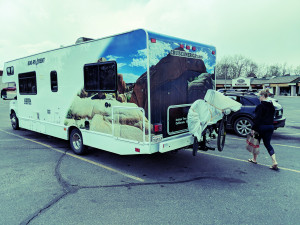 We rented a 32ft RV from Cruise America and loaded it up with 2-race bikes, and 3-mountain bikes to get around on while we were there. The drive was a frantic one, across Colorado, through Utah, across a tiny part of Arizona, through Nevada and into California. It involved a overnight stops and a lot of gas. Overall it was a 1224-mile journey that took just over 2.5 days. The return was pretty much the same.

While the ratio of travel time to race weekend was far too much travel, it was definitely the easiest to get to the race with a LOT of stuff. We had limited time as we'd taken A. out of school, with permission, and she had a concert on the Wednesday after the race, which was a must. So 5-days traveling for a 3-day race weekend. The RV was definitely the right way to go, just not on such a tight experience.

Cost wise, for 3x airline tickets, and transporting 2x race bikes, we might have got there quicker, but probably not cheaper. Admittedly the fooot to the floor driving burned a lot more gas than a more leisurely drive, but at $1600 for the RV, $600 for fuel, and another $600 for camp sites, a good deal. Wildflower isn't just a race, it's an experience now. That's the official branding. There are way more options for camping and "glamping" now than there were back in 2003. Kates coach, Allison Freeman, wrote up a before and after on Wildflower that are worth reading.

Suffice to say, the key to a good experience for me was to get a full RV hookup site, at a decent rate. Mission accomplished, we even got some shade from the trees. In fact, we were not far from where we'd been in 2003, except this time we had a sewage dump.

After doing packet pickup, it was quickly obvious the worst thing about the "experience" was no printed race guide, and very poor cellphone coverage. That meant that even the easy questions couldn't be answered unless someone nearby knew the answer, or you went down to the Expo and asked at the information booth.

Information on when shuttles ran, if you could take bikes on the shuttle, how to get to Transition on race morning etc. were all much more difficult than they needed to be. This information could have been included in a single page insert available at check-in, or instead of being information that was dynamically fetched in the Wildflower app, it could have been built-in.

Overall though it was a great experience. Easy in, easy there, and easy-out late Sunday afternoon.

There was no day-before transition check-in, and so it was up early, prep everything and head down on the bike. The road down is not the easiest to ride down with a backpack full of race stuff.

I hadn't really studied the course, afterall I don't remember it being that tough from 2003.  The water was lower than I remember it in the lake, but not nearly as low as recent years. This made the run from the swim on concrete actually both hard, and fairly long. The start was pro's first, followed by a stream of age grouper waves. Disappointingly, the older male age groups started near the back, before the Mountain Bike Triathlon started. My age group, Men 55+ was the last long course age group, except the relays.

This I think will have meant a lot of the volunteers and the race organizers will have made the day longer than it need be. More on this later. 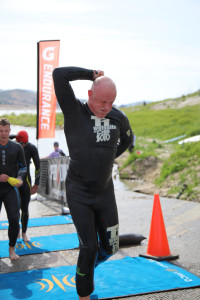 When my wave started, I stayed to the back and swam a pretty good swim. Although we were swimming into the sun for half the course, the bouys were easy to see and the course uncomplicated.

My swim felt OK, no hyperventilating and heart pounding moments. No major clashes with other athletes, just a steady swim. I found myself coming out of the water in 41:53 for the 1.2-mile swim, just under a minute slower than 2003 and at time that put me in 12th out of 33 in my age group.

All good so far.  As I said earlier it was a long run up the boat ramp and into transition. I was pretty breathless by the time I got there. I was out of T1 in a pedestrian 4:48, slowest in my age group. My heart rate had climbed to a race max 202BPM during the run. No wonder I was breathless. 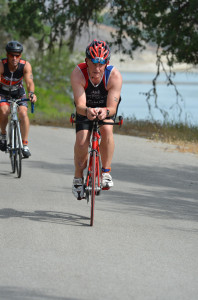 I had bought my standard Guru Merus tri bike setup. With a standard 53/39T and an 11/25 cassette. How wrong could I have been. Frankly, I should have bought my Felt AR2 road bike. It has an 11/29 cassette and would have been a more comfortable ride, and definitely better for the climbs I'd completely forgotten about.

It took me nearly 8-miles to get my heart rate under control. This was especially true since within the first two miles there was an enormous climb up Beach Hill. For every section where I thought I was flying, there were two sections where I felt I was going to fall off my bike I was going so slow. Two thirds of the way up Nasty Grade, I watched one rider after another in front of my bail, I did the same. It was a long slow walk to the top.

I saw a fellow competitor act like a complete ass on the course. She had been standing at the side of the road and a pickup truck was following a slow moving, a safely passing grey saloon car. Everytime the car slowed, the truck honked and got irritated. When they got to her, she stepped out into the road and blocked the single lane. As the truck finally passed, she threw the contents of a water bottle at it. I was too far back to see if that actually hit. When I caught her a little later I made a mental note of her number. When the race photographs came out, checked it was her and emailed her Tri club and the race directors.

Towards the end of the bike, and especially in the last 5-miles, I picked up speed and got through to the dismount line. My bike time was a disappointing, 4:31 for the 56-miles. Again the slowest in my age group, and nearly an hour slower than my 2003 time.

In transition I wasted time trying to find a referee to report the rogue competitor to, couldn't find anyone, and left. Shortly out of a 6:02 T2, not the slowest but bottom five I started to meet a few other runners. 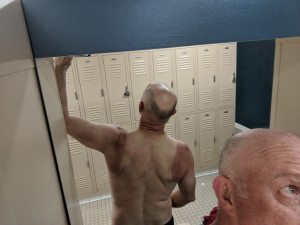 Out on the run course it was brutally hot. This was definately something I didn't experience in 2003. When I came off the bike, the temperature had been 93f without a hint of a breeze.I had a plan for sunscreen for the race, but changed it at the last minute.

This was a serious mistake. I'd felt weak and slighty disoriented in the latter stages of the bike. I was sure though this was because I'd been out longer than planned, not that I'd got sun stroke. I had. This was very reminiscent of the 2006 MiamiMan triathlon. Another long course race, another bandly managed sun block race.

I took this picture 6-days later at the pool. Not only is the burn still visible, but you can see where I had blood blisters on both shoulders. For a "former" redhead, this was a serious mistake. For the second mile I ran alongside these two guys. One, #1517, Jim Crane from LA, was in my age group; the other, #1500, Robin Bittner, also from CA. We passed the photographer, and were running parallel to the shore, well before we got to Beach Hill, I glanced at my watch, did a mental calculation and decided to quit. Despite their offers to walk with me for a while, I declined, knowing there is not only no way I'd beat my 7:22 time from 2003, but also I was likely to be out there for maybe another 4-hours and wouldn't make the cutoff.

Given the heat and my heart attack, and that with a 4:55, and 6:02 half Ironman distance races in my record, I had nothing to proove. I walked back to the expo area, handed in my chip, in exchange for an iced towell and set off to find Kate and A.

The cutoff for the longcourse race was 5:30pm. Given the 9 a.m. start time, anyone who went more than 8:30pm should have DNF'd. Making the older men go last, was a mistake. It should have meant 72-year old Ben Gribb, the only competitor in the 70-74 age group, DNF'd with an 8:47:57 finish, Robin, and Jim from my age group, as well as upto 20 ther men and a number of women also be DQ'd.

However, this isn't Ironman. They let people finish with friends a family, they let people who passed the cut-off finish and keep their results. And that is a big part of the Wildflower Experience, I can only recommend it.

Kate may race their again, I won't though. Never say never, but I just don't see me ever doing a long course triathlon again. I've said that before though. If I do though, next time I must choose the right equipment.

Next day I felt fine, and we were up early to support Kate as she did her first ever Olympic Distance triathlon, She'd trained hard, and got the result she deserved with only the run coming in outside of my projected time. She'd used a roadbike with compact cranks. Smart woman. I'm very proud of her. It's for her to decide to post pictures and race details.

Posts from This Journal “wildflower” Tag